This may be the oddest Jimmy Stewart related radio show ever. BBC Radio 4 broadcast this show on December 29, 2011. Stewart’s voice appears nowhere in the show, but he and Gloria are an intricate part of the story and their daughter, Kelly, is heard. The show was produced by Mary Colwell, edited by Julian Hector and presented by Matthew Hill.

The radio show explores the mystery of the Yeti finger, from its discovery in the Pangboche monastery in Nepal, its clandestine journey to London and the DNA test which would determine its exact origin.

An article in the U.K. newspaper, Daily Mail, the day before the broadcast helped set up the story. You can read the entire article here:

If you are not inclined to read the article, here are several pertinent sections. First, a picture of the finger: A photo of Stewart and its legend also appeared: 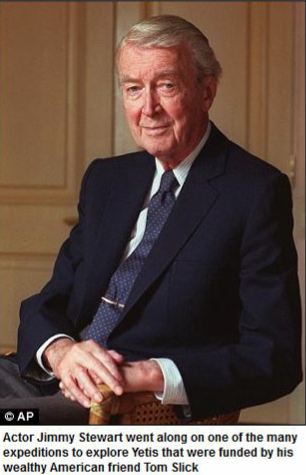 Finally, this section of the article explained the Stewarts’ involvement:

As for the radio show itself, here is the segment explaining how the Stewarts’ helped in getting the finger out of India. Kelly Stewart also is heard.

If you’d like to know if this was really a Yeti’s finger, you can listen to the entire 30-minute program, you can do so here: