On September 25, 1948, the Air Force Association’s “Operation Wing-Ding” was held at Madison Square Garden in New York City. Jimmy Stewart, Bob Hope and Ed Sullivan took turns acting as the master of ceremonies. The September 29th edition of Variety had a full run down on the activities: 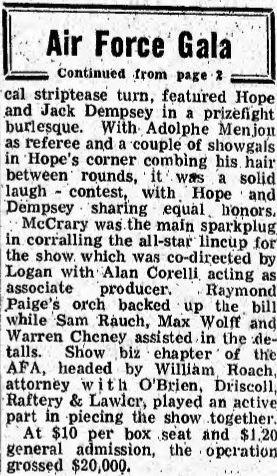 In their radio listings for September 25, the day of the “Wing-Ding,” the New York Times reported that there would be a half hour program from the convention.

Since the program is not available, there is no way of telling if Stewart appeared on the broadcast. But, there is at least a chance that he did.