This program was broadcast by NBC on September 1, 1947, which was Labor Day. The day following the broadcast was the second anniversary of Japan’s surrender to end WWII. The program was very much in support of the Marshall Plan in trying to aid much of Europe affected by the war.

The show was advertised in newspapers very simply, like this ad from The Evening Sun, Hanover, PA:

Although the show is not in general circulation, it is part of the NBC Collection at the Library of Congress and we did have the chance to listen to it there.

Tex McCrary introduces the program and then Stewart begins by saying:

“Did you ever see a miracle? A war correspondent I know claims he did once; aboard the battleship Missouri when the Japs surrendered two years ago. Remember the scene on deck? American generals, British admirals, Russian generals…and, some forlorn Japs, all standing stiff as boards inhaling the history in the air…and then something happened. Suddenly, in the midst of all that war famous brass, a strange character showed up, just wandered in and stood there for a moment. It was a…a plain American soldier, a G.I., with an open collar; the sort of guy who can’t stop looking like a civilian. Boy, on a battleship, he looked lost and bewildered. It was like he walked out on a stage where he didn’t belong. Well, none of the big shots noticed him, but this war correspondent did and tried to get his name, but the G.I. shook his head and disappeared. He, ah…he just disappeared. Now, the newspaper man two years later, he’s not so sure what he saw. The G.I., I mean, whether he was real flesh and blood or whether he was an apparition. Maybe he was a ghost of some soldier or someone trying to say something…something like…”

At this point there is a short skit…there would be several of these throughout the program. After the skit, Jimmy continues:

“In his mind, the G.I. is trying to make plans for a peace that will last. Now, my name is James Stewart and I’d like to sort of talk a little bit about peace and pieces of paper. You know, two years ago the most important piece of paper in the world was that surrender document signed aboard the Missouri. It was easy to talk about, it was exciting…it was historic…quite a piece of paper. It’s probably under glass somewhere, part of the archives. But, it isn’t the most important document in the world now. There’s another document that’s much more important…only a lot of people don’t realize it. As a matter of fact, I’ve got one of them right here in my pocket. A two-by-six slip of green paper…it’s a buck…a buck…an American dollar bill and it’s the cornerstone of something called the Marshall Approach. Now, if you don’t know what this is, don’t be alarmed, you’re in good company — right now you are. Because during the summer, as a topic of conversation, the Marshall Plan had a little too much competition from a lot more interesting subjects.”

Another skit appears here. This time several men are talking about golf, gambling, baseball and other routine daily things. After the sketch, Stewart adds these comments:

“Well, those were the topics of conversation…not peace, but golf, long skirts, baseball; things we’ve wanted to talk about for a long time. And, as a matter of fact, maybe talking about a peace plan is sort of boring compared to a world series. And nobody knows that better than the State Department and General Marshall. All summer long they’ve been trying to figure out how to explain his plan for the rehabilitation of Europe to the American people. But, instead of listening or watching the main event, even Washington seemed much more interested of the fight in the grandstand. Well, sure, why not? It had…it had color.”

Now there is a courtroom skit focusing on a recent Washington probe, after which Jimmy says:

“Well, that…ah…real-life drama was a little too much competition for any peace plan. You know, a hot Washington probe is always front page stuff. But, the Marshall Plan, about all it rates is a dry editorial. But I heard about one young guy, he used to be a bombardier out in the Pacific, now he works for a paper near here and, it’s funny, the other day he thought he had the story of the year. And he wanted it run on the front page on the anniversary of the big surrender. But he had an editor who straightened him out.”

The skit now turns to a news writer trying to sell his editor on a story about the Marshall Plan. His editor turned the idea down because the story would make for dull reading. Stewart did not agree.

“Dull reading — well, now, we’ve got a tricky sort of a situation here. We’ve got an editor, and a lot of others like him, who believes that you don’t want to hear an explanation of a peace plan. He figures you’re gonna be bored. So, you don’t get the explanation. You just hear that we’re spending millions of dollars abroad and you start saying to yourself, why don’t we spend our own dough here…on ourselves, we need it. Charity begins at home. So, you begin to mistrust the Marshall Plan and Congress reacts the way you feel and what happens; they might refuse to give out with the money to help the other nations. It’s that buck again. Right now, where are we? Well, I’ll tell you…we’re out for ourselves. That’s the old ostrich of isolation rearing its ugly head and then ramming it right back in the sand again. That’s us…because we weren’t informed. You know, out where I work…out in Hollywood, there are a lot of men who learned how to use the movies for propaganda; for teaching guys how to fight during war. And a lot of them would still like to try to use the movies for explaining an idea like the Marshall Plan. But I…I guess out in Hollywood, we’re just like everybody else; we think we know what people want and that’s what we give ‘em, maybe a little less to be safe, but, well, that is what happens most of the time.”

The skit that follows this is about an author who doesn’t like the way his story has been revised for a film. When he complains, he’s told that his story wouldn’t draw people into the theaters. Jimmy retorts:

“Well, it looks pretty hopeless, doesn’t it? Nobody seems to want to tackle the job of explaining a peace plan to us. Well, maybe… maybe it would take somebody really higher up to figure out a way to get it across. Some voice that would make us see this thing clearly. Someone who wants to tell us…someone we’d listen to. Oh, but I suppose I’m asking for a miracle to happen and miracles are only born in heaven. In heaven, say…say, you know, up there I’ll bet there are a lot of men who’d know what to say – all the guys whose number came up in the last war; all the Yanks and the British Tommies and the Chinese and the Russians. Of course, we don’t know what they’d do up there. I wonder…I wonder whether they just look down at us and watch, or maybe they’re having a life all of their own up there. But, maybe even breaking off into foursomes and playing golf on a sort of green pasture. I wonder, maybe…maybe at this minute four of them are teeing off on a cloud… on a white fairway…four of them up there, speaking the same language. In the skit, one member of the foursome, Joe Smith, tells the others that he has been drafted to become the Unknown Soldier for the Second World War. Joe isn’t happy with the assignment. He’d rather go back to Earth and tell everyone of the need for peace. His superior tells him that he must find a “live” person to do that kind of work. Joe recommends Harold Russell. Russell had been a soldier in the war and had had both of his hands blown off in an explosion. His lost hands were replaced by hooks. He later was cast in the film, The Best Years of Our Lives, where he played Homer Parrish, a sailor who lost both hands in the war. Joe knows that people will believe Russell.”

At this point we hear a voice saying, “We interrupt all those programs in progress to bring you…Harold Russell.” Russell explains the Marshall Plan in terms of his own life, ending by saying that Europe needs rehabilitation, peace insurance…not charity.

Following this, Stewart makes what appear to be his final remarks. The show abruptly ends after these words and some of the end of the program may be missing. It is difficult to tell from the available tape.

“Well, I guess you’d say that this sort of thing couldn’t happen; the voice of the Unknown Soldier whispering down Main Street, USA. Well, maybe that’s what we need…a miracle like that; a miracle over Main Street. And, you know, that would be a pretty good way to celebrate the end of the war. Fix it up so that our second Unknown Soldier could help us understand the way to stop the next war before it starts. And, if the assignment angel likes the idea, I hope they work it out. Maybe…maybe, Joe down there in Arlington will try to get through tonight. You never know about miracles.”

The day after the broadcast, Variety ran this story on its front page: 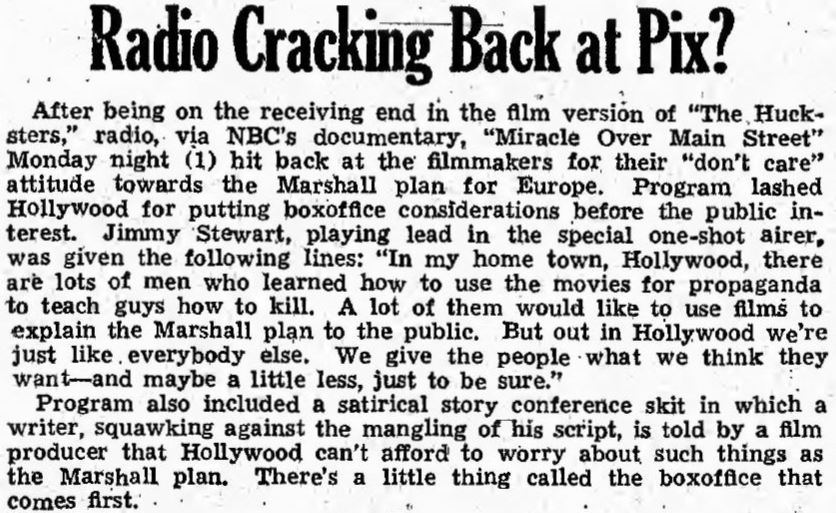 Looks like the “Cold War” between the U.S. and the Communist Block wasn’t the only “Cold War” happening in 1947.