On September 2, 1947, this radio listing appeared in the Washington Post, Washington, DC: 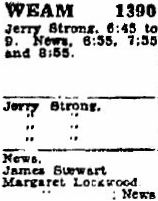 This is one of those listings which is very intriguing, but at the same time very annoying. Intriguing because it would be great to know exactly what it is and annoying because it looks like that will not happen.

The block of time associated with the Stewart listing is 10-11 a.m. It is impossible to tell if the program involving him was a half hour program which followed to 10 a.m. news, or, if he was a guest on the hour long Margaret Lockwood show. We may never know.