For the third and final time, Stewart recreated his role of George Bailey in a Screen Guild production of It’s a Wonderful Life. The first two times had come on December 29, 1947 and December 29, 1949.

The following display ad for the program is from the Detroit Free Press, Detroit, MI, on the day of the broadcast:

This preview of the show is from The Winona Republican-Herald, Winona, MN: 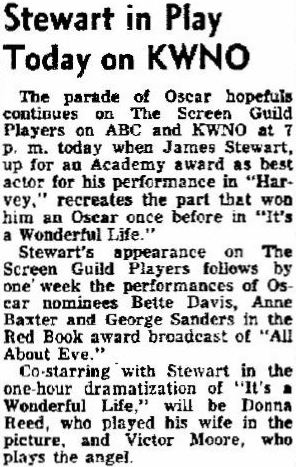 We found several previews like this one that refer to Stewart as having won his Oscar for It’s a Wonderful Life, when in fact it was for his performance in The Philadelphia Story. Of course you couldn’t just “Google” things in 1951, but you’d think that someone would have checked the facts.

This show is not available. It is possible that both of the latter shows were simply rebroadcasts of the original show. The three main stars were the same in all.