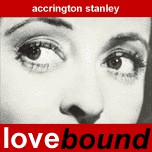 One of the songs on the album was James Stewart. The chorus, heard several times throughout the song, features the words, “if only James Stewart were with me now he’d know what to do, he always did somehow.”